Now that MIUI 13 is slowly rolling out globally, I can’t help but be a little disappointed not because my strong Redmi Note 9 Pro isn’t getting it soon or at all, but because two years later there are still software problems that “attacks” me daily . So I’ll use that as a reason to express the frustration of a consumer who feels let down.

Do not get me wrong. I love my Note 9 Pro. It’s versatile and despite its age, the hardware can still keep up with my day-to-day life. But due to some software issues, I really wish I had cashed out and bought the equivalent of a Samsung A52 5G instead.

The most annoying of these was the integrated dark mode. In the past, images in Messenger were reversed, text on websites would be indistinguishable from the background, and Snapchat is still unusable.

Disclaimer: MIUI 13 has made changes to the dark mode feature, but many users are still reporting issues with it. Since I have not tested MIUI 13 yet, this article is based solely on my experiences with MIUI 12.5.3 and also tested on 12.5.19 (the latest version.) 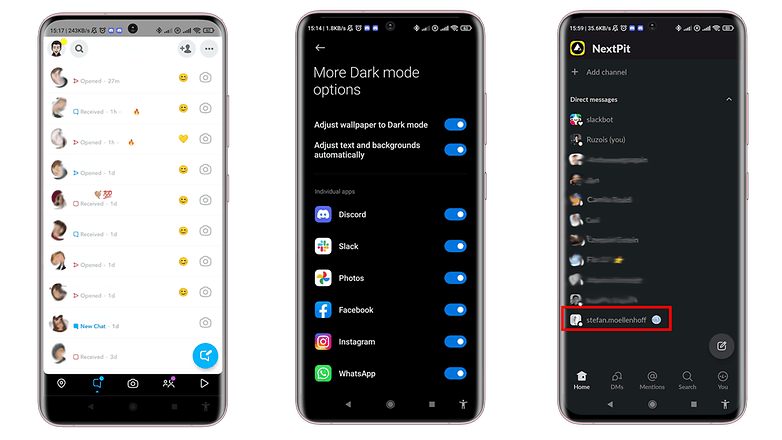 Snapchat (left) is still unusable as most of the UI elements are invisible. Slack (right), on the other hand, has minor issues with some inverted images. / © NextPit

Two years ago, dark modes with darker tones in the user interface with the aim of reducing eyestrain were still a novelty. So with MIUI 12, Xiaomi brought a “Dark Mode 2.0” feature. This acted as a global filter, converting all light mode content on your screen to mimic the “dark mode” you can find by default in many apps these days. But the execution was far from perfect. Eventually I gave up and just lived with the white mode on.

The suggested “fix” is to exclude the apps through a menu. This is not an attractive solution as your eyes have to be constantly adjusted when switching between light apps and the dark system UI

To be fair, after MIUI 12.5, only a fraction of the problems remain. Apps like Meta’s Facebook, Messenger and Instagram saw the biggest improvement and can be used almost without interruption… almost. 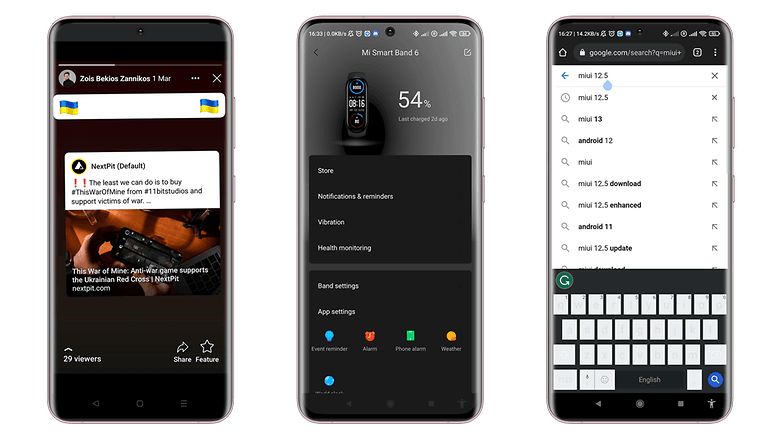 Even Xiaomi’s own app has problems and using a keyboard other than Gboard is difficult. / © NextPit

But this week I finally had enough: I was just trying to write a Facebook story and knowing that Facebook has native support for dark mode, I didn’t expect any problems. As I typed, the text appeared white on a white background. Much to my dismay, Xiaomi’s bug made what I typed indistinguishable and what I posted was a white bar with an emoji on each end. Disabling Dark Mode 2.0 for Facebook solved the problem. For keyboards, this solution didn’t work.

The grass is greener on the other side

If I sound like I’m overreacting, it’s because this isn’t impossible, and it’s been two years. I recently tested the Oppo Find X5 running ColorOS V12.1 with an identical but better dark mode. As you can see from the images, Snapchat’s menu still looks like it was created during the childhood of UI design, but this is a concession I’m willing to make, as it’s black, and it works at least. 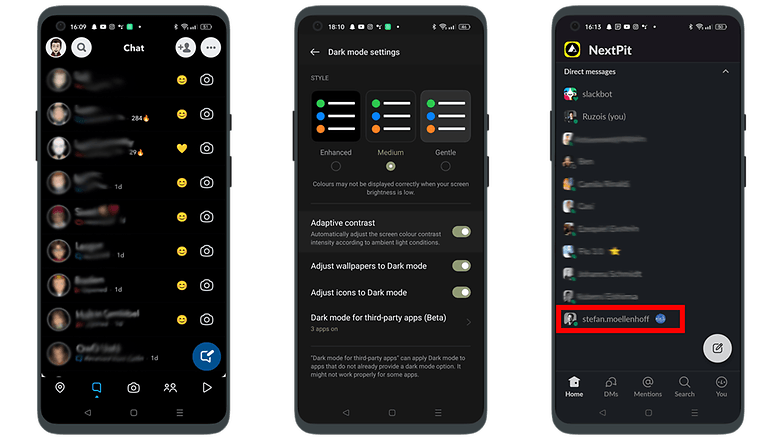 In ColorOS V12.1 Snapchat (left) works, we get more options and the weird bugs in Slack (right) don’t occur. / © NextPit

In contrast, even the Xiaomi Mi Fit app does not work well with Dark Mode 2.0. It’s not just the fact that the app itself hasn’t implemented a dark mode, but they haven’t made it work properly on their own devices.

First of all, I am an Android user and I like to experience some first bugs of promising features. ‘Promising’ is an important word in this context because it creates expectation and implies involvement. The problem is to leave features half off and expect your customers to switch to a new device with new features.

My request to Xiaomi and other companies out there: instead of selling me a new broken thing, to replace the old broken thing, I fix my old broken thing so that I can use it until I feel like experimenting again. Only then will I go back and gladly give you my money.

This decision is not an easy one for me as your device has been a companion for many years and I would gladly choose your hardware again. But it’s time to work consistently on your software as well. So Xiaomi, please, it’s been too long. Restore your dark mode.

Now it’s your turn: Have you ever felt forgotten by a company that should still support your device? This is your chance to vent (respectfully) in the comments.

was original published at “https://www.nextpit.com/xiaomi-fix-your-dark-mode-been-two-years”