What is Huawei Super Device?

At MWC 2022, Huawei announced a new feature that seamlessly connects Huawei devices together for a smoother experience.

Huawei has announced a collaborative ecosystem that allows users to create a smart office Super Device system for most Huawei devices, including laptops, PCs, tablets, smartwatches and smartphones.

The system is not a completely new development for the company, although the new features that have been added have made the overall system more fluid and accessible to users. Read on to learn more about what Super Device is and how it works.

What is Super Device?

Super Device as a term covers a wide range of connectivity features, with a focus on Smart Office. Super Device also includes convenient travel, health and fitness, as well as entertainment, with the overall goal of creating a more connected system for users between their devices.

The overall goal is for users to connect all of their Huawei devices into one ‘single experience’ that allows users to use essentially any device for any task, meaning you can play a phone app on your PC or work on your tablet screen. while connected to a laptop.

When will it be launched?

Super Device is currently available, but users will need PC Manager 12.0 or later. Users can access Super Device after logging in on all their devices with the same Huawei ID.

What devices does it work on?

Super Device is supported on most Huawei devices, with PCs and laptops best connected.

Check out the list of just some laptops and PCs that support Super Device:

What does Super Device do?

Users who have a Huawei laptop or PC can use these machines as a hub to create a professional work environment, with the ability to easily share resources between devices, quickly pairing smartphones and smartwatches with earbuds and other accessories.

You can easily connect devices using drag and drop, with tablets and laptops having three options: mirroring, extending and collaborating.

Mirror, as the name suggests, mirrors the computer screen on the tablet, with the ability to still use the tablet’s stylus, while Extend allows you to use the tablet as a second screen. Collaborate makes it easier to drag and drop files between devices, allowing users to seamlessly transfer different files without wires or third-party services. 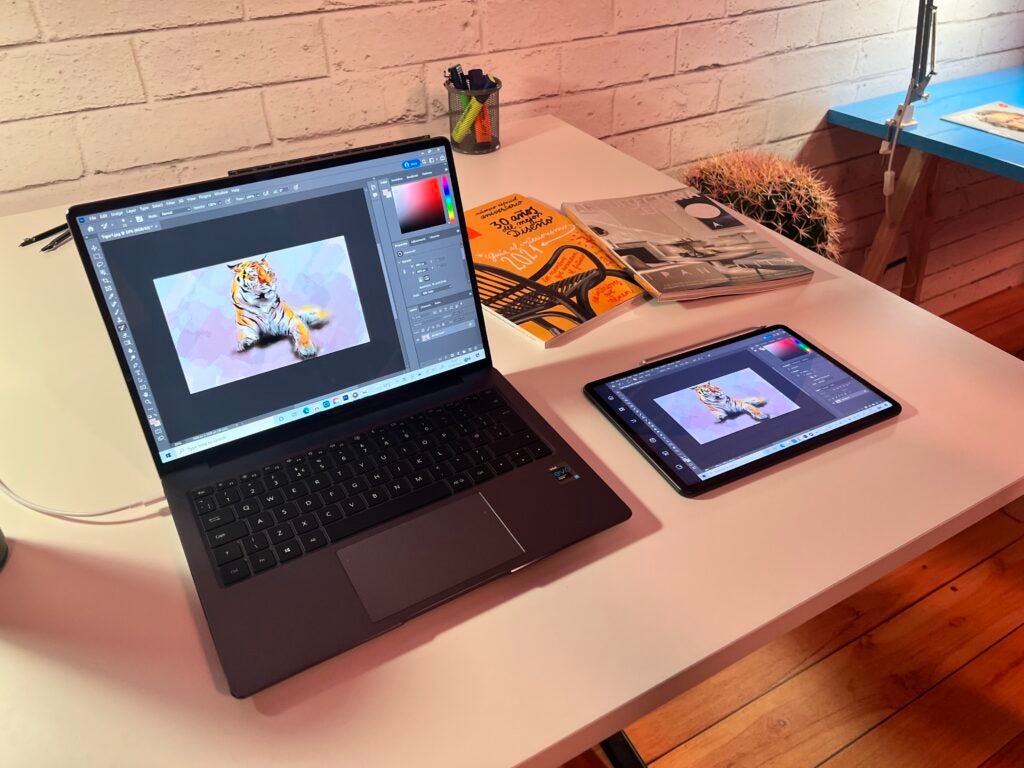 Looking at the image above, the Huawei MateBook 14s is connected to a Huawei tablet, with the ability to draw on the tablet with the stylus while still working on the laptop, allowing users to get more out of their creative devices.

Samsung also offers the Galaxy ecosystem, with one feature that allows users to connect Galaxy keyboards for tablet covers to also connect to Galaxy smartphones for enhanced productivity. Neither Galaxy nor Apple have the same drag-and-drop capability, making it easy to instantly connect or disconnect devices as needed.

PC users can also access content from Huawei’s AppGallery for an enhanced ecosystem of PC apps, again focused on a unique experience where you can access mobile apps on a PC or tablet.

Some of the compatible apps will be able to run on Windows using the HuaweiMobile App Engine, which should open the doors even more for a connected system.

was original published at “https://www.trustedreviews.com/news/what-is-huawei-super-device-4213937?utm_source=keystone&utm_medium=keystone_core_reviews_rss&utm_campaign=trusted+reviews”