Samsung will once again present us with new smartphones in the still fairly young year of 2022. This time it’s the company’s very popular A-Series. As usual, we start with our overview of the key specs of the Galaxy A53 and Galaxy A33: 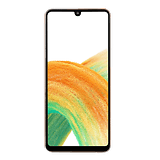 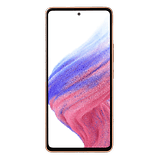 All models are available for pre-order starting today, but will not ship until April. Time enough for us to take a look beforehand at the differences between the two midrange handsets. 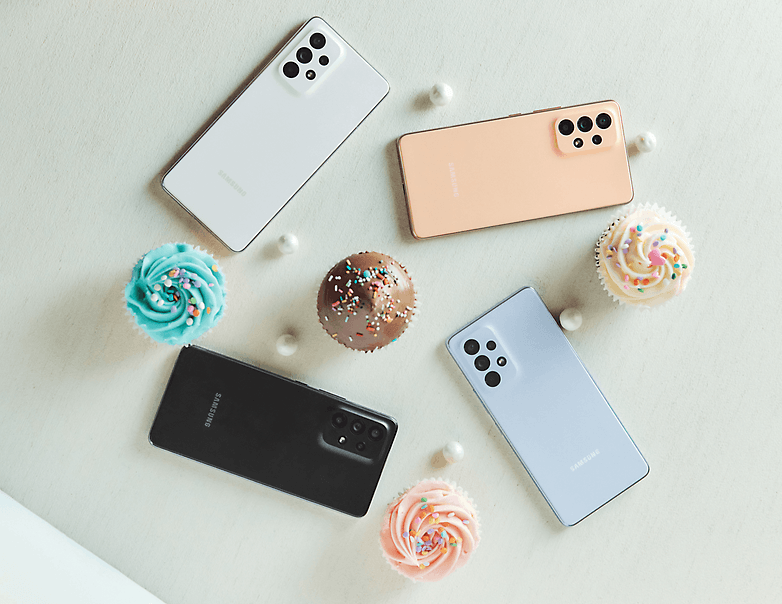 The new A Series looks good enough to eat, doesn’t it? / © Samsung

Samsung Galaxy A53 vs. Galaxy A33: display and case

If we take a closer look at the two smartphones, they initially look almost identical. Samsung uses Corning Gorilla Glass 5 and follows the well-known design language for both models. The camera island merges into the housing, which is IP67 certified in both devices.

Samsung itself speaks of a “beautiful and functional” design, which may also be called a bit boring. We do notice a difference at the front: only the A53 has a hole for the selfie cam. The A33 comes with a classic notch and has a chin that is too long for my taste. 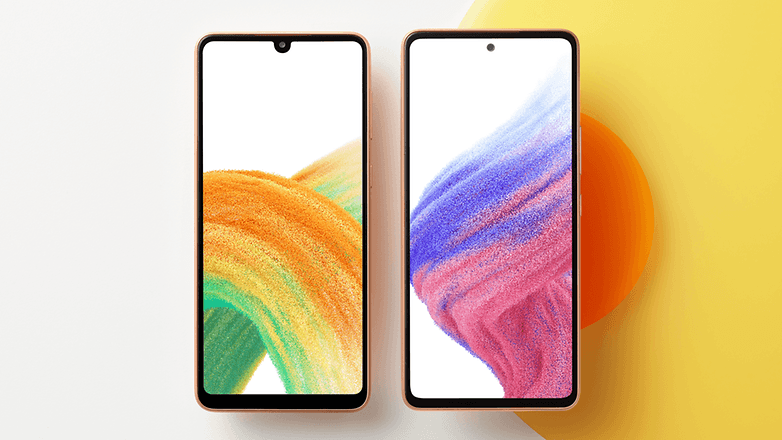 The manufacturer still shows no weaknesses in the display itself: the almost equally sized panels (A33 with 6.4 inches, A53 with 6.5 inches) offer an FHD+ resolution and rely on Super AMOLED technology. The display of the A33 lets you refresh photos at 90 hertz, while the A53 manages 120 hertz. Unfortunately, the refresh rate isn’t adaptive, but you can manually switch to 60 hertz to save battery. The brightness of less than 500 nits is unfortunately rather mediocre.

The Koreans have written sustainability over them, and just like with the Galaxy S22 series, we notice that also with the first parts of the A-Class: both the side buttons and the SIM card slots are made of so-called ‘post-consumer materials’, ie recycled plastic.

Samsung Galaxy A53 vs Galaxy A33: Performance and Connectivity

Under the hood there is a first, because the Exynos 1280 is brand new. As nice as that is, we can’t say much about the performance of this SoC so far. Test devices have been requested, we can tell you more in the reviews. What we know so far: The Exynos 1280 relies on eight cores that clock at up to 2.4GHz and is manufactured in a 5nm process.

In terms of connectivity, the two devices are again absolute twins: both are on the 5G network and are not yet completely up-to-date in terms of WiFi (no WiFi 6) and Bluetooth (only 5.1).

Samsung Galaxy A53 vs Galaxy A33: Cameras

As is so often the case in the mid-range, Samsung also has to do more than less when it comes to the number of camera sensors. So you get four cameras on the back of both smartphones — how handy they are is of course another story. The quartet is led by a 64MP camera in the A53 and 48MP in the A33 — with optical image stabilization in both cases. 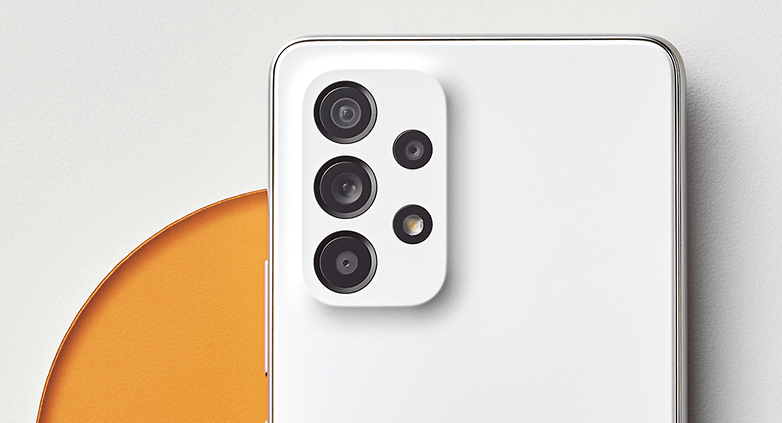 We already know the sensor setup from Samsung / © Samsung

Both camera arrays then offer us an ultra-wide angle camera and sensors for depth and macro. In the A53 these are shooters with 12 and 2 x 5 MP, while in the A33 8 MP, 2 MP and 5 MP should suffice. On the front is also a 32 MP camera for selfies.

However, Samsung mainly wants to score with new and improved camera functions: both the night mode and the portrait mode have been optimized. The latter allows you to use effects and filters and change the background. Compared to the predecessor, this now also works with the ultra-wide angle camera. There is also an eraser on board, which should remove unwanted people or objects from the background.

Samsung Galaxy A53 vs Galaxy A33: Software

Software has become Samsung’s most important discipline. The A33 and A53 also come with Android 12 and the popular One UI 4.1, but Samsung is especially exemplary as they currently have an unparalleled update policy. The two cheap A-class phones also benefit from this and will receive four major Android generations and security updates for five years.

Security also plays a big role with Samsung devices and so the two new smartphones also come with Samsung Know. In addition, the “secure folder” is on board and with “Private Share” you control who has access to your files and for how long.

Samsung Galaxy A53 vs. Galaxy A33: battery and fast charging

First things first: No, the chargers are not in the box! Samsung refrains from cramming the charging plugs into the packaging. According to Samsung, this is happening for sustainability reasons and as part of Samsung’s “Galaxy for the Planet” initiative. We can discuss that, but Samsung explains that it is not just about the chargers themselves. By omitting the chargers, the packaging, which is also durable, can be significantly reduced.

This means lower material costs and the boxes take up much less space when traveling halfway around the world. The only question is how much more space will be saved if millions of chargers have to be shipped on the next steamer. 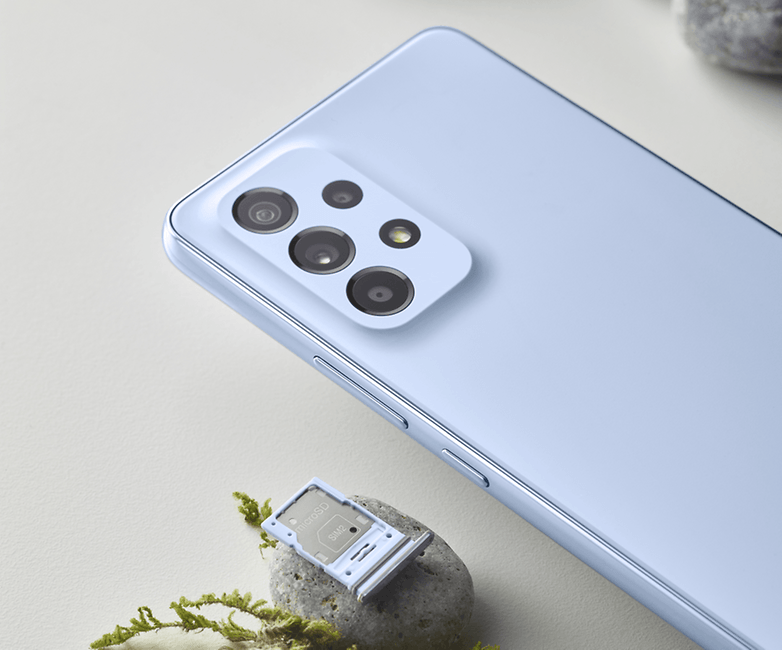 Speaking of sustainability: the SIM card holder is made of recycled plastic. / © Samsung

Do you want to know more about the batteries? Oh yes: both have a capacity of 5,000 mAh and can be charged up to 25 watts. That Samsung calls this ‘super-fast charging’ is of course almost a bit ironic in 2022. But the combination of a large battery and 25 watts of charging is actually one that should help you smoothly through everyday life.

Samsung Galaxy A53 vs. Galaxy A33: price and availability

So now of course you want to know what you have to pay for the two new phones. You should know: the A33 is only available with 128 GB of storage and costs $369.99 (list price).

Logically, you’ll have to pay a little more for the larger A53: the 6GB/128GB model costs $449.99 and will be available March 31 from T-Mobile and Verizon. It will also be sold through AT&T, Samsung.com and other retail and carrier partners beginning April 1. Samsung therefore bases the price on last year’s A52 series.

You can pre-order the devices now and Samsung also wants to reward the early birds: the Galaxy Buds Live White is included as a gift. 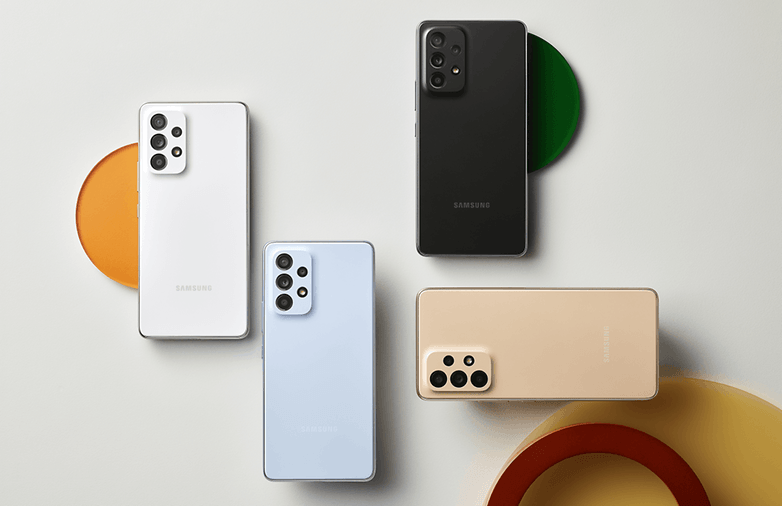 Four colors are available. Which one is your favourite? / © Samsung

Samsung Galaxy A53 vs Galaxy A33: First Impressions

On paper, the new mid-range presents itself more as a selective rather than a significant update of the previous models. Samsung is refraining from offering both 4G and 5G models, which I think is justified. On the other hand, I think it’s less justified that they do it without the chargers because it also seems like a price increase to me through the back door.

However, it’s fair to say that we will benefit from new SoCs, the battery is bigger and we can look forward to improved cameras, at least according to the spec sheet. Both smartphones are priced slightly more expensive than some comparably equipped Chinese competitors. However, we also have to be honest here and mention that Samsung spends money on things like IP certification that others are happy to do without.

We won’t be able to definitively assess the phones until we can put them under the microscope. But until the test devices arrive at our editorial office, you can already let us know in the comments what you think of Samsung’s new A-Series.

was original published at “https://www.nextpit.com/samsung-galaxy-a53-vs-galaxy-a33-comparison”