The Realme 9 Pro Plus is a solid all-round mid-ranger that distinguishes itself with one stand-out component: an unusually accomplished main camera. Add in fast charging, adequate performance, and a good screen, and you have a stand-out option in the £350 smartphone category.

The Realme 9 Pro Plus might have a ridiculously convoluted name, but it certainly earns the ‘Plus’ moniker with a significantly improved camera offering compared to last year’s Realme 8 Pro, and indeed the Realme 9 Pro.

At a price of £349 for the one and only UK model, which comes with 8GB of RAM and 256GB of storage, you’re getting a solid mid-range phone with a main camera sensor that’s practically part of the flagship aristocracy.

Realme has laid on a fairly generic design with the 9 Pro Plus, but there’s one element that stands out from some of the other best mid-range phones. Opt for the Sunrise Blue model, and you’ll get a tricksy finish that shifts from blue to pink in direct sunlight. 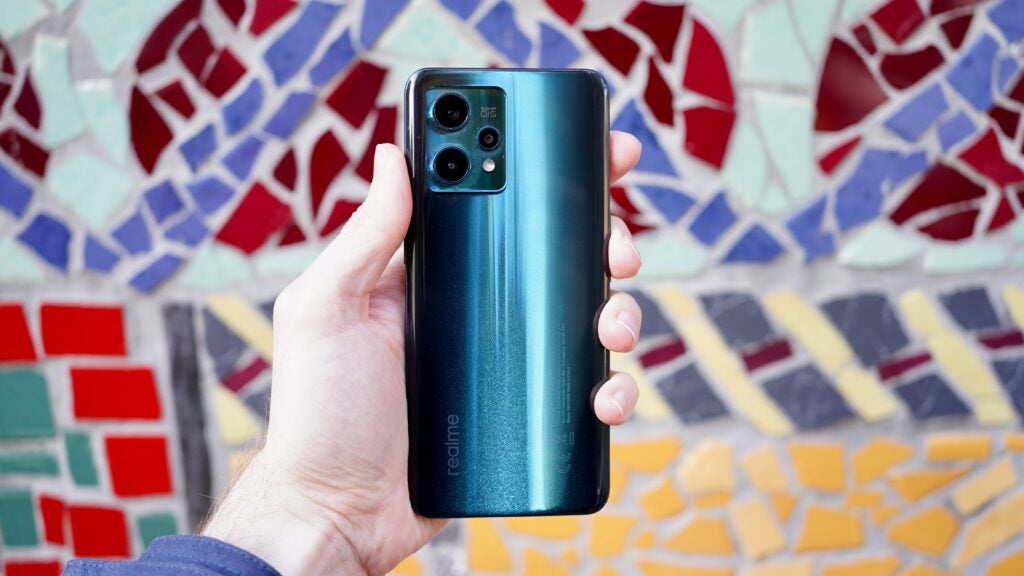 I’d love to bring you hands-on impressions of this clever paint job, but Realme saw fit to send me the Aurora Green model, which is decidedly less exciting. Oh, and there’s also a Midnight Black model, if you really don’t want your phone to stand out from the mid-range masses in any way.

Uneven colour choices aside, this is a normal mid-range Android phone with a Corning Gorilla Glass 5 front, glass back, and plastic body. Its dimensions are similarly (and reassuringly) unremarkable at 160.2 x 73.3 x 8mm, and it weighs a just-so 182g. 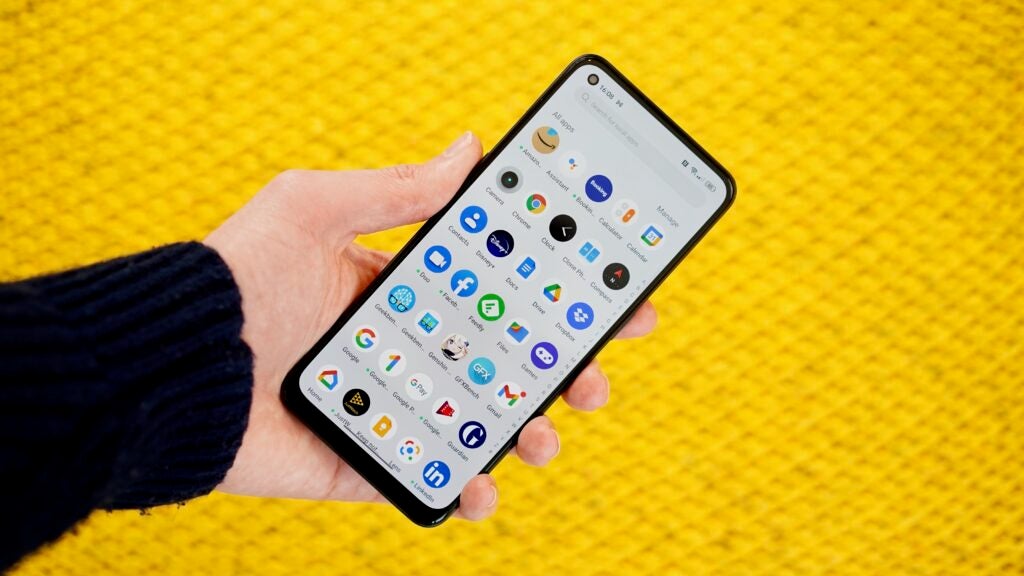 As it happens, I tested the Realme 9 Pro Plus alongside the OnePlus Nord CE 2 5G, and the two phones share a very similar look and feel. If anything, Realme’s design is less remarkable, as it doesn’t have the attractively curved camera module of the OnePlus.

Unlike its close cousin (Realme and OnePlus are both owned by BBK Electronics), and like the Poco F3, the Realme 9 Pro Plus packs in a pair of stereo speakers. That’s always good to see – or rather hear – at this end of the market.

There’s no IP rating though, so you’ll want to watch out for those rainstorms. And dust storms, for that matter. Hey, they happen. 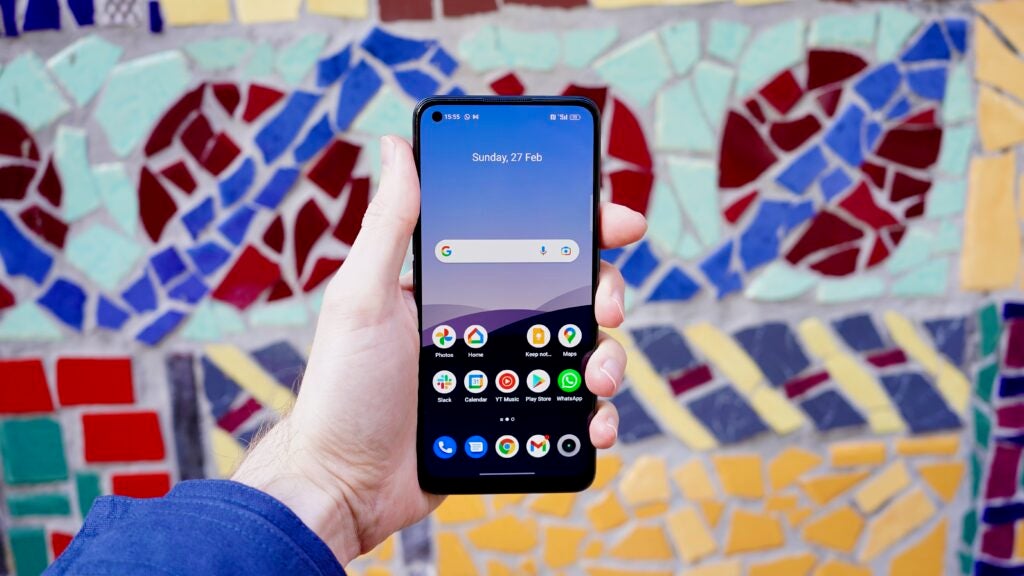 The Realme 9 Pro Plus display is a 6.4-inch Super AMOLED panel with a 90Hz refresh rate. Again, that’s very similar to the OnePlus Nord CE 2 5G. Given that this was arguably the latter phone’s most impressive asset, we have no complaints here, even for £50 more. 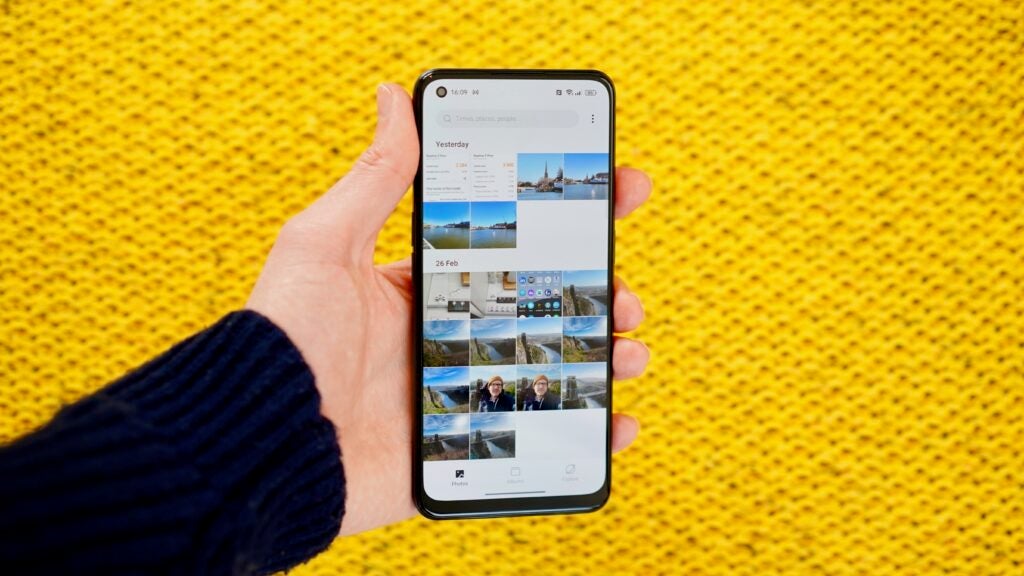 Colours are accurate, with a measured sRGB gamut coverage of 99.9%, while the FHD+ (1080 x 2400) resolution proves sharp enough. This screen doesn’t get massively bright, with Realme claiming 430 nits in typical conditions and 600 nits in high brightness mode. I recorded a maximum brightness of 397 nits with autobrightness switched off, which is sufficient if unremarkable.

And so we come to the main course of our Realme 9 Pro Plus. Colour-changing finish aside, this is a fairly unremarkable phone until you reach that triple camera system.

In fact, the phone’s 8MP ultra-wide and 2MP macro provisions are bog-standard for a smartphone of this price, and can be quickly ticked off and dismissed. It’s the 50MP wide sensor that really makes a statement here. 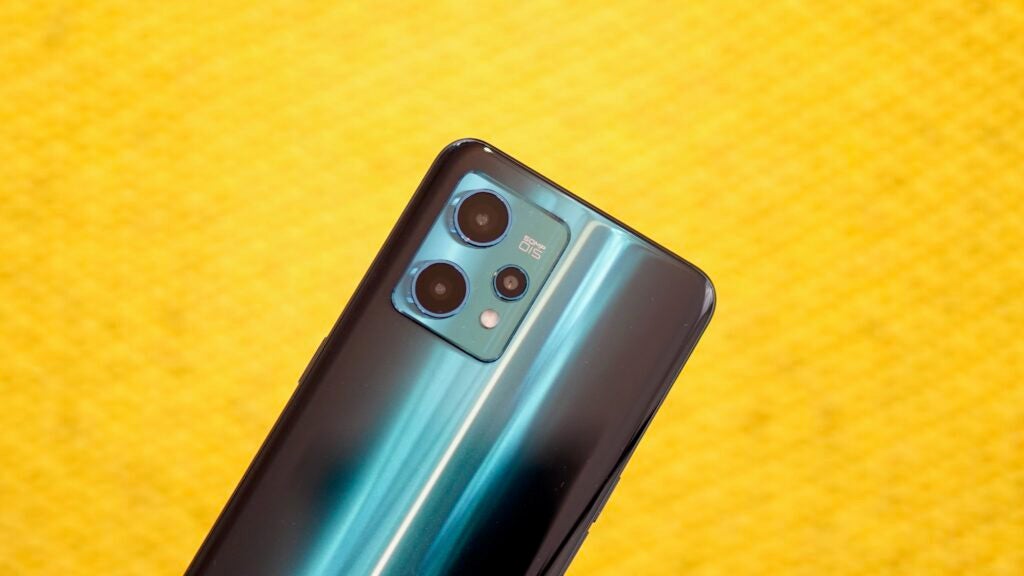 The Sony IMX766 sensor at the heart of this camera system is the very same one that fronts the new Oppo Find X5 Pro, one of the best phones for 2022. It’s not unheard of to find it in a mid-range phone – the OnePlus Nord 2 packed in this very sensor late last year. It was very noteworthy at the time, however, and the Nord 2 also costs £50 more than the Realme 9 Pro Plus.

This 50MP Sony IMX766 sensor is notably large at 1/1.56”, particularly for a phone of this price. Together with an f/1.8 aperture and OIS, it’s several grades better than most lower-mid-range phones at scooping up light and taking detailed, vibrant images. 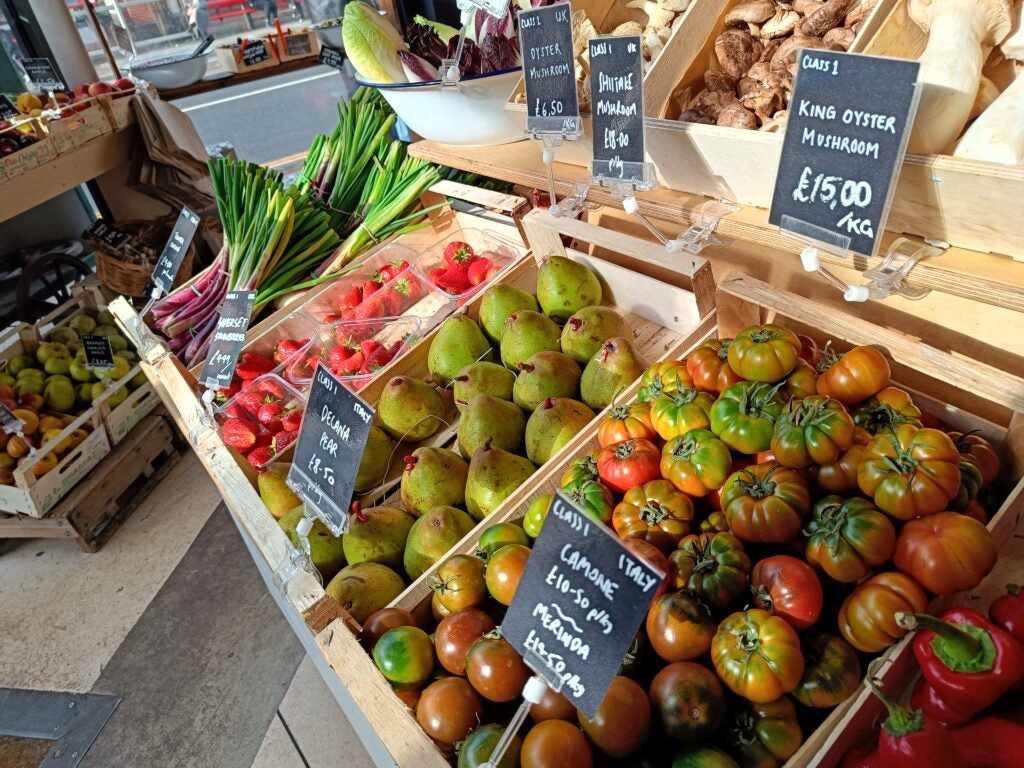 I compared some shots taken with both the main camera of the Realme 9 Pro Plus and the Oppo Find X5 Pro side by side, in both daylight and night hours. 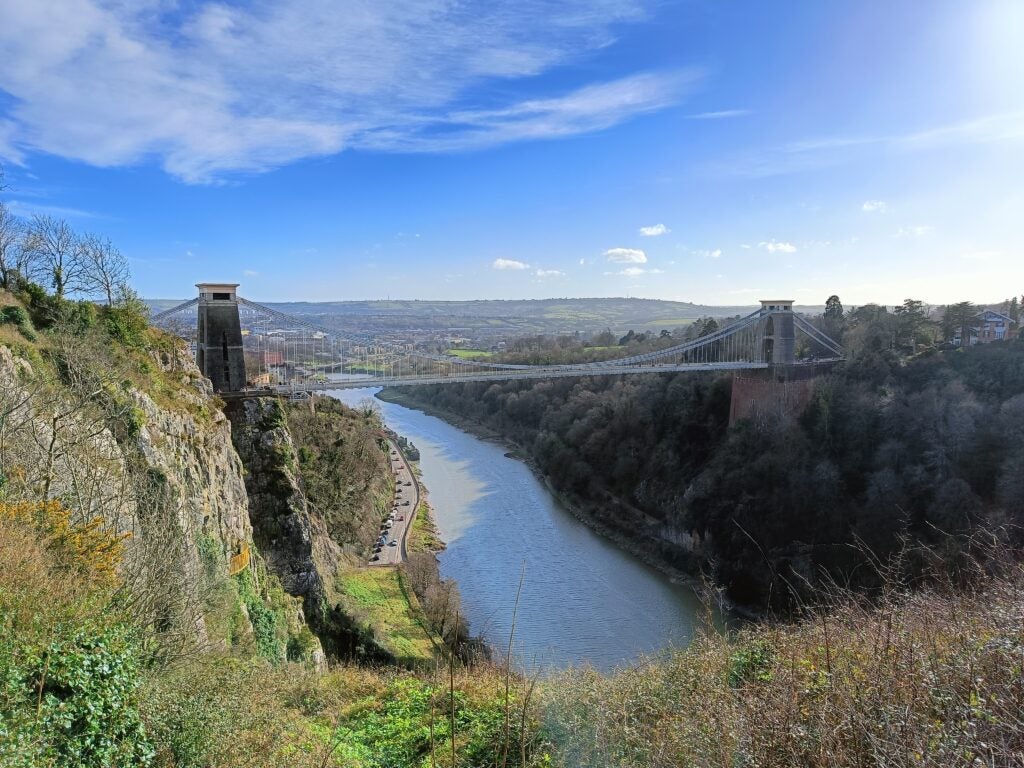 While the Oppo definitely got the nod overall in terms of sharp detail and tone, much of the difference seems to have been a matter of the particular decisions both manufacturers have made on colour science and image processing, alongside a more advanced stabilisation system and a custom image processing chip. 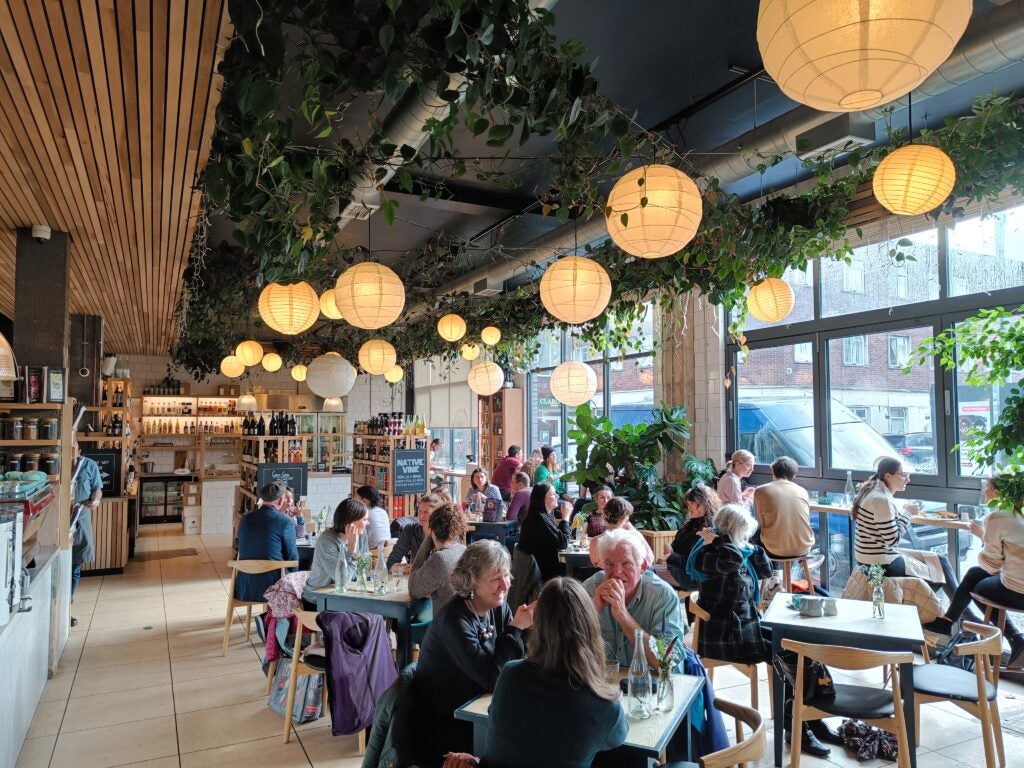 For example, the Realme 9 Pro Plus tends to over brighten its Night time shots, though the level of detail and clarity remains impressive. Again, the fact that I’m even comparing it with a phone that costs three times the price speaks volumes for it. 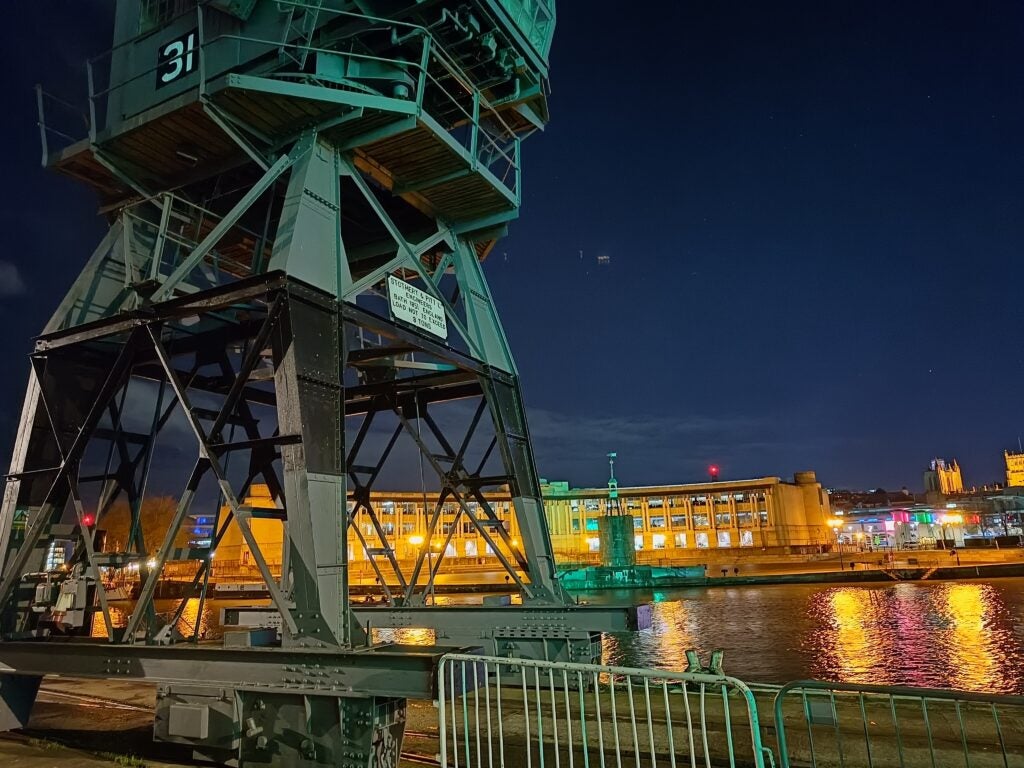 Compared to the OnePlus Nord CE 2 5G, it’s not even close. Shots taken with the Realme 9 Pro Plus are better balanced and more vibrant in good lighting, and far clearer and crisper in low light. 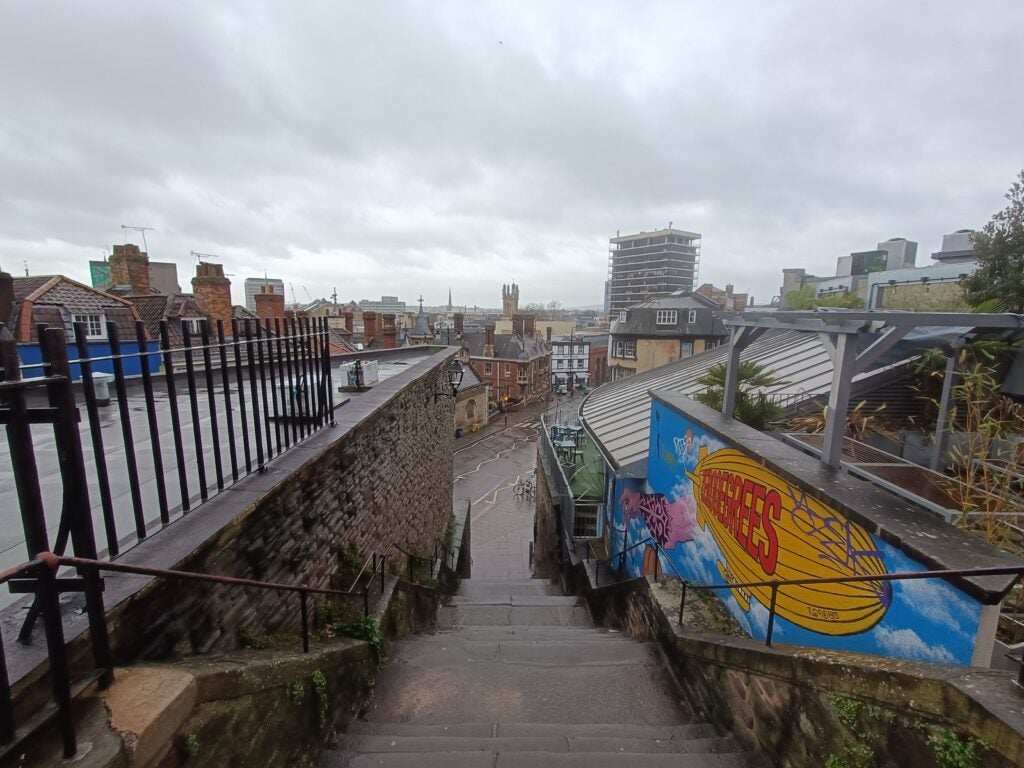 While the Realme 9 Pro Plus punches above its weight with its wide sensor, its ultra-wide sensor is decidedly bog standard. Detail is lacking, and highlights tend to be blown out. The general tone isn’t a million miles apart, which is something. As ever, if you want a high quality ultra-wide camera, you’ll need to spend considerably more money.

The 2MP macro sensor is a mere space filler, and not really deserving of much discussion. 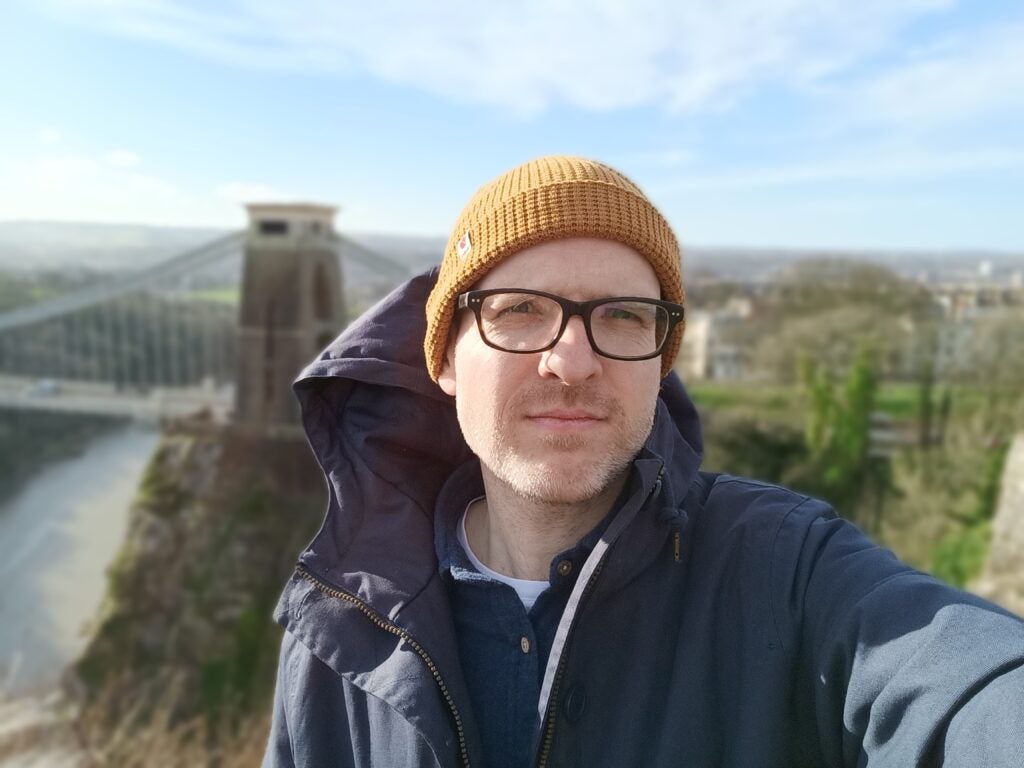 The phone’s 16MP selfie camera is no great shakes either, with a general lack of punch and dynamic range. Shots look a little flat, and skin tones aren’t the most convincing.

The Realme 9 Pro Plus runs on the MediaTek Dimensity 920 5G, a relatively new 6nm chip with a purported 9% boost in gaming performance over the Dimensity 900 that powers the OnePlus Nord CE 2 5G.

There’s a clear advantage for the Realme 9 Pro Plus, but it’s not a massive one. Now bring in the Poco F3, which soundly beats it in all of the above benchmarks, and the Realme finds itself in the middle of the mid-range pack.

In practical terms, the Realme 9 Pro Plus is nice and smooth, with no discernible stuttering in general navigation. Gaming performance is on point too, with Genshin Impact running in a playable state on Medium settings, though it defaults to Low.

The UK model of the Pro Plus comes with 8GB RAM and 256GB of internal storage, though it seems there is a lower 6GB/128GB model out there in some regions.

You get Android 12 out of the box, though this is heavily layered with Realme UI 3.0. Realme has played around with what it places to the left of the home screen in recent times, but thankfully the Realme 9 Pro Plus goes with the default Google Feed provision. 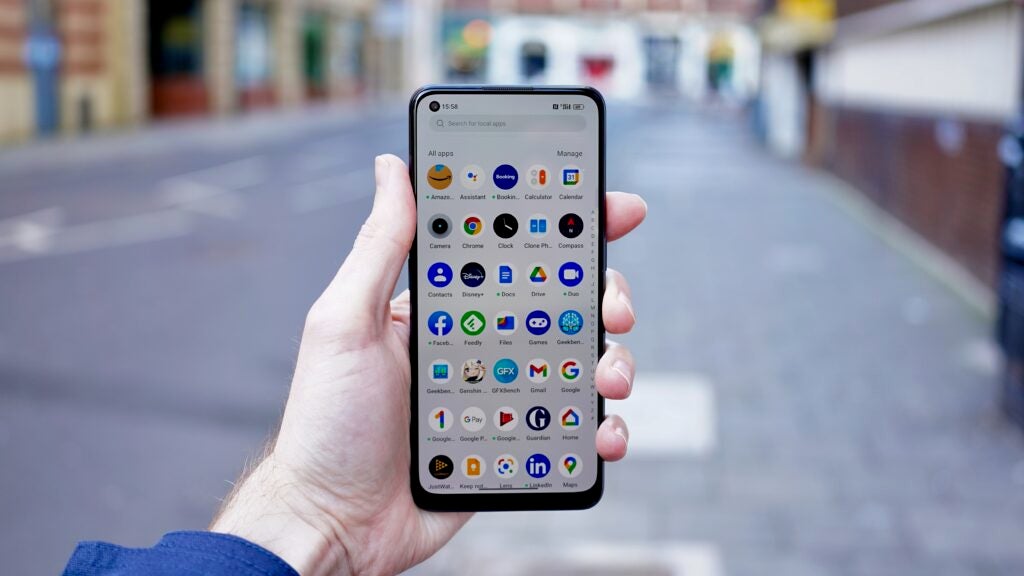 More generally, this is a pretty middle-of-the-road take on Android. The custom icons aren’t too in-your-face, while the default app provision includes plenty of Google apps alongside Realme’s own Videos, Games, My Files, Music, and Phone Manager apps, to name just a few.

You also get some third party apps like Amazon, Facebook, LinkedIn, and Booking.com. I’d rather there were none whatsoever, but this is far from the most egregious bloatware offender.

If you want a clean, stock-like experience at this end of the market, you’re better off with a Nokia or a Motorola phone. The OnePlus Nord CE 2 5G’s OxygenOS UI felt more appealing too.

Regardless of those preferable UIs, I guarantee none of the above phones have a main camera as good as this one. It’s all about priorities, and you certainly won’t be at all hamstrung by the Realme 9 Pro Plus’s functional UI.

Realme has packed its latest phone with a 4500 mAh battery, which is a match for the OnePlus Nord CE 2 5G and the Poco F3.

In my experience, it’s good for a full day of moderate to heavy usage without making you sweat on recharging. A long 16 hour day, with a little over 3 hours of screen on time (what I’d call light-to-moderate usage) left me with just under 60% in the tank.

An hour of Netflix streaming sapped just 5% of a charge, while an hour of music streaming drained an impressive 1%. That’s pretty good going, and certainly competitive with its mid-range competitors.

Also impressive is the provision of a 60W wired charger, which Realme claims can get you to 100% in 44 minutes. This seems to be broadly accurate, as I recorded it going from completely empty to 100% within 50 minutes.

Most people won’t charge the phone in this way, of course. It took 18 minutes to get from 0 to 50%, which falls short of the OnePlus Nord CE 2 5G and its 67W charger, but is still good going.

One hour of continuously running the 3DMark Wild Life Stress Test sapped 13% of the Pro Plus’s battery, which falls short of the slightly more expensive OnePlus Nord 2 (on 10%), but just pips the likes of the Nokia X20 (with 14%).

Should you buy it?

If you want great pictures for £350, and an eye-catching mid-range design. There is no current phone that shoots as good images for this amount of money, and the Sunrise Blue model has snazzy looks too.

The Realme 9 Pro Plus offers a genuine top grade option for anyone willing to pay up to £350 for their next smartphone – especially if photography is a priority. It might not be as powerful as the Poco F3, and its display isn’t quite as fluid, but its 50MP main camera punches way above its weight. For sheer image quality and low light poise, it fills the mid-range spot vacated by the Pixel 4a.

We test every mobile phone we review thoroughly. We use industry standard tests to compare features properly and we use the phone as our main device over the review period. We’ll always tell you what we find and we never, ever, accept money to review a product.

Used as our main handset for a week

Camera tested in variety of situations with all modes

Tested with synthetic benchmarks and real world use

How good is the battery life?

It’s good for a full day of fairly intensive usage

Is this phone 5G?

Does it have wireless charging?

There is no wireless charging supported here, which is a shame but understandable.

What was the release date?

We run each phone we review through a number of specific tests to test performance, battery and more. You can see the results below.

Organic Light Emitting Diode is panel technology that allows each individual pixel to produce light rather than relying on a backlight. This enables the screen to accurately display blacks by turning off the pixel, resulting in improved contrast compared to conventional LCD panels.

An abbreviation for milliampere-hour and a way to express the capacity of batteries, especially smaller ones in phones. In most cases the higher the mAh, the longer the battery will last but this isn’t always the case.

Offering faster download and upload speeds when compared to 4G. Great for game streaming and HDR video playback. Not supported everywhere yet and speeds vary wildly.

The modern USB connector you’ll find on most Android phones, new laptops, cameras and games consoles. It’s reversible and used for charging along with data-transfer.

This post Realme 9 Pro Plus Review was original published at “https://www.trustedreviews.com/reviews/realme-9-pro-plus?utm_source=keystone&utm_medium=keystone_core_reviews_rss&utm_campaign=trusted+reviews”