Renders of an upcoming OnePlus Nord CE 2 Lite surfaced last week, now we’re getting some more details about the device from regulators and other sources. A device with a model number GN2200 is suspected of being the Lite phone and has just been certified by the FCC.

It shows 5G connectivity (bands: 2, 25, 41, 66, 71) and appears to be powered by a Snapdragon chipset rather than a Dimensity like the other two Nord 2 models. Punching into “GN2200” in the Geekbench database reveals one result. 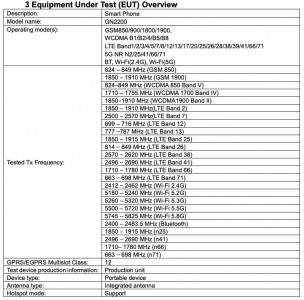 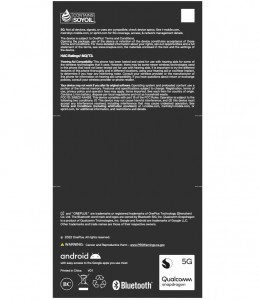 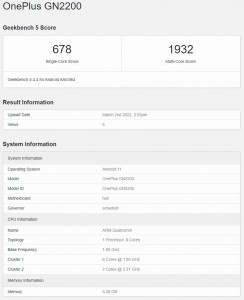 Certifications from TUV Rheinland reveal that the phone has a 4,500 mAh battery with support for 33W fast charging. The charger delivers 5-11V at 3A. This is the same battery capacity as the Nord CE 2, but half the charging capacity. 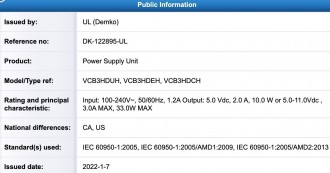 Anyway, another source provided information about the camera. The main module has a 1/1.8” sensor (0.7 µm pixels) and a lens with an f/1.7 aperture and electronic image stabilization. 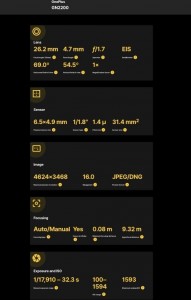 On the back, three camera modules are visible in the renders, but current information suggests that the other two are a depth sensor and a macro camera. The selfie camera is expected to have a 16 MP sensor and a 6.6-inch display on the front.

We haven’t heard anything about when the OnePlus Nord CE 2 Lite will be made official, but all the documentation seems to be ready, so it shouldn’t be long.

was original published at “https://www.gsmarena.com/oneplus_nord_ce_2_lite_leaks_reveal_snapdragon_695_chipset_64_mp_camera_and_33w_fast_charging-news-53588.php”