Disclaimer: This hands-on is part of a collaboration between Nextpit and Lefant. This did not affect the editorial judgment in this review. 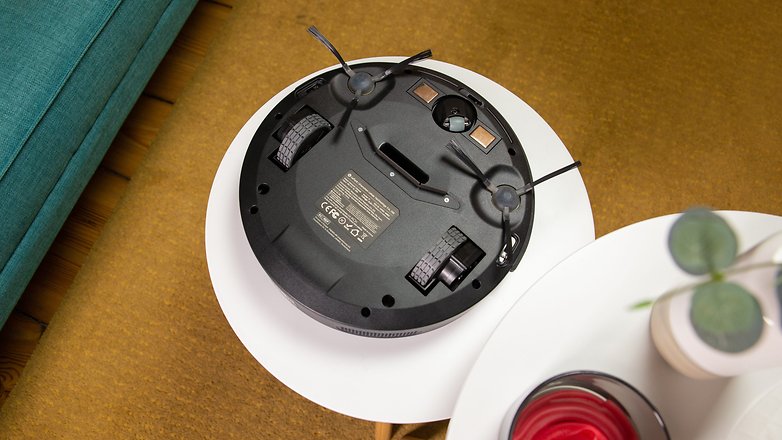 The Lefant F1 is a compact vacuum robot. At the back you can see four holes where the erasing module fits / © NextPit

In terms of regular price, the Lefant F1 isn’t exactly a bargain. Nominally, the robot costs $299.99 on Amazon – and in this price range there are plenty of established competitors, some with better features. However, Lefant is currently running a discount campaign on Amazon where you can save $75 on top of an already existing $45 discount.

Unpack and set up

Even before opening, the packaging is striking: the box is quite small for a robot vacuum cleaner. The impression is confirmed after opening the lid. With a diameter of just under 28 centimeters, the Lefant F1 is really tiny.

The typical size for robot vacuums is usually about 35 centimeters. Fortunately, this does not mean that the dust container is significantly smaller. At 600 milliliters, it offers the same or even more volume than many significantly more expensive and larger vacuum robots from Roborock & Co. 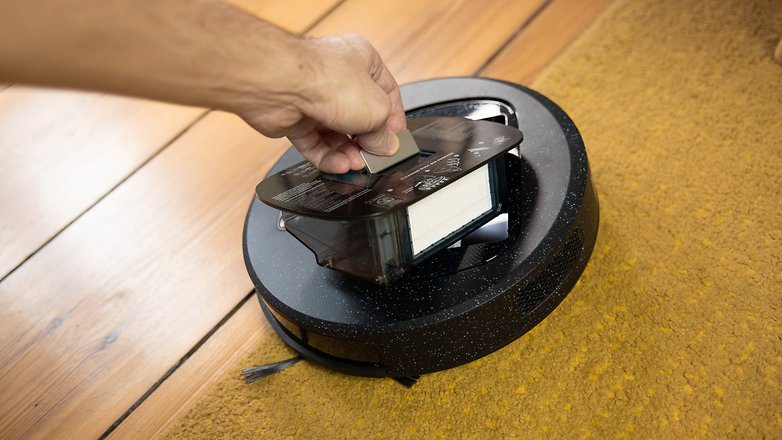 The accessories in the box are quite generous: here you will find a mop plate, two reusable cloths, a replacement fine dust filter and a two-meter long magnetic tape to mark the forbidden zones for the robot. However, the latter is quite thick and is clearly visible under carpets. Last but not least, in the box you will also find a set of disposable wet mop cloths. There are replacements for both the disposable and reusable wipes on Amazon:

After placing two of the four brushes in the appropriate holders, the dusting robot is ready to use – the cloth is optional. By the way, the Lefant F1 doesn’t have its own wipe tank – so it can carry a wet washcloth or the disposable wipes described above. 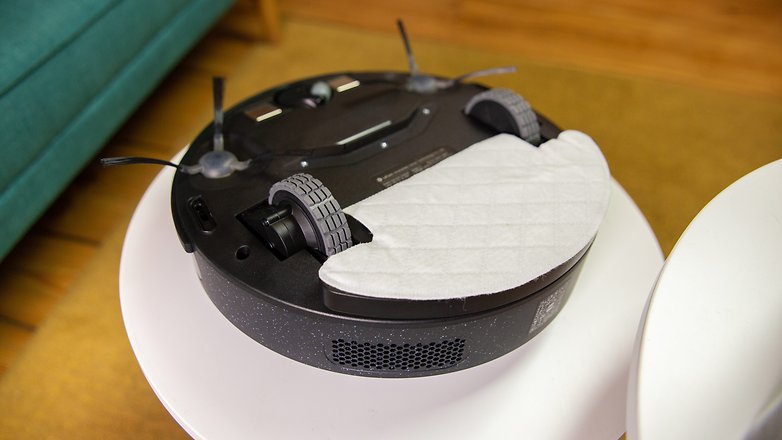 Several such disposable wet wipes are included in the scope of delivery. There are also reusable wipes in the box / © NextPit

The setup itself is largely self-explanatory. The QR code on the robot leads to the download of the app, which is available in English and Chinese. Unfortunately, there are a few problems during the installation. When setting up the account, the app does not allow passwords with special characters. In the absence of a specific error message, I’m only coming up with this by trial and error. Pairing with the home WLAN also fails.

The Lefant app’s help dialog hides a note that neither the SSID nor the Wi-Fi password can be more than ten characters. I’m 19 and 28 respectively – and curse profusely. 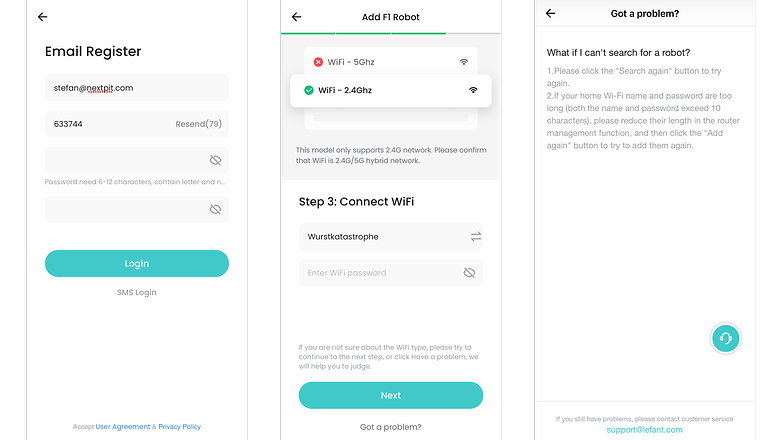 No special characters in the password and up to ten characters for SSID and WLAN password: The setup was a bit bumpy / © NextPit

For the first test, I charge the robot to 100 percent. This takes a relatively long time of about three hours, but given the strong battery that is not surprising.

The battery should be enough for three hours of continuous vacuuming. Since the robot needs about 15 to 18 minutes per ten square meters, you get about 125 to 130 square meters of suction surface. The cleaning process can be started via the rather rudimentary app or via the buttons on the top of the Lefant F1. Then let’s get started!

Suction and sweeping performance in test

The Lefant F1 eagerly gets to work with its two brushes and 4,000 Pa suction power. However, the initial suction processes are frustrating. The little robot navigates itself several times in dead ends and gets no further. Sometimes it gets stuck under a flower pot stand, sometimes between the sofa and the wall – and once it gets tangled up in a coat and screams for help.

Unlike many more expensive competitors, the Lefant F1 does not have a laser scanner or the like on board – and it does not create a (permanent) map. Once it gets stuck and you free it, the cleaning process starts from scratch. 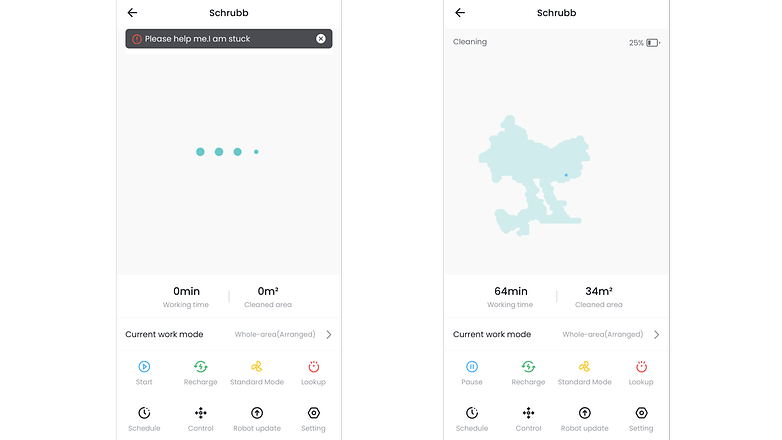 If the robot gets stuck once, the cleaning process starts again. Although you can roughly see in the app where and how the robot has already been on the road, the Lefant F1 does not create and save a map. / © NextPit

In practice this means: You really have to remove all obstacles. Don’t leave anything on the floor – and mark dangerous spots with the supplied barrier tape. Due to the lack of maps, there is no other way to declare certain rooms or corners a no-go area, unless you just close the door. It is also not possible to clean individual rooms or corners in this way.

In my case, that would be unfavorable: the Lefant F1 – like other vacuum robots – regularly gets stuck on the legs of my dining room chairs. A barrier via magnetic tape is unfortunately not practical here. 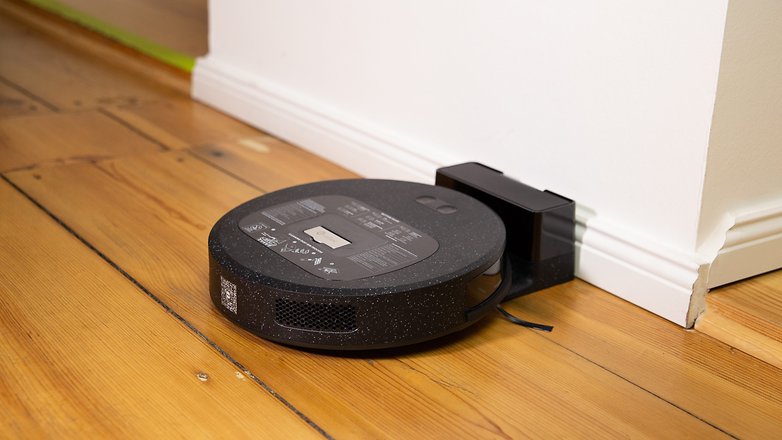 The charging station is – just like the Lefant F1 itself – very compact. / © NextPit

When observing the Lefant F1, the suction pattern seems quite jumbled. However, the app shows as an animation how the robot makes its way through the rooms – and here it does not miss any empty spaces. This is also confirmed in practice.

Crumbs, dust and dirt can no longer be found after a complete cleaning. Of course, the wiping function cannot be compared with that of more expensive models, but it is very practical for cleaning, for example, the kitchen or the entrance from tomato splashes or shoe prints. You just have to close the doors so that the Lefant F1 cleans exactly this area. 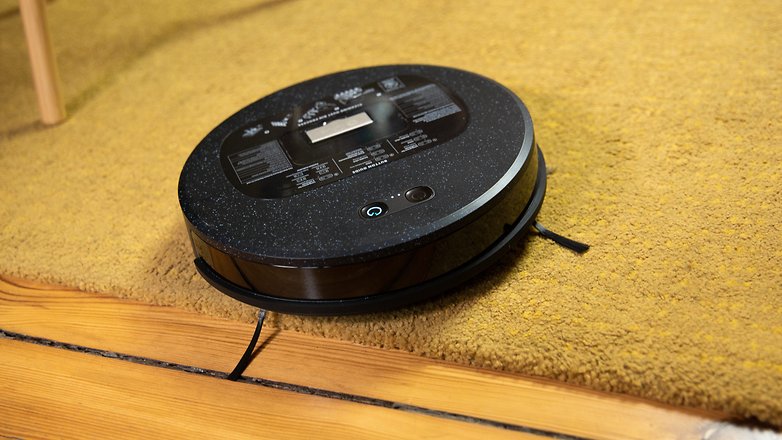 With its two brushes, the Lefant F1 reliably scoops the dirt into the suction module. / © NextPit

The app itself is quite rudimentary. Here you can start and stop the cleaning process, set cleaning schedules, set different suction power, adjust the collision sensitivity and install firmware updates. There is also a remote control function via virtual arrow keys and a find-me function that makes the robot beep loudly.

The Lefant F1 is nominally $299.99 at Amazon. However, there is currently a discount promotion running here where you can save $45 plus $75. At a price of just under $180, the Lefant F1 is definitely a very exciting vacuum robot, which convinces us above all with its large tank and strong suction. 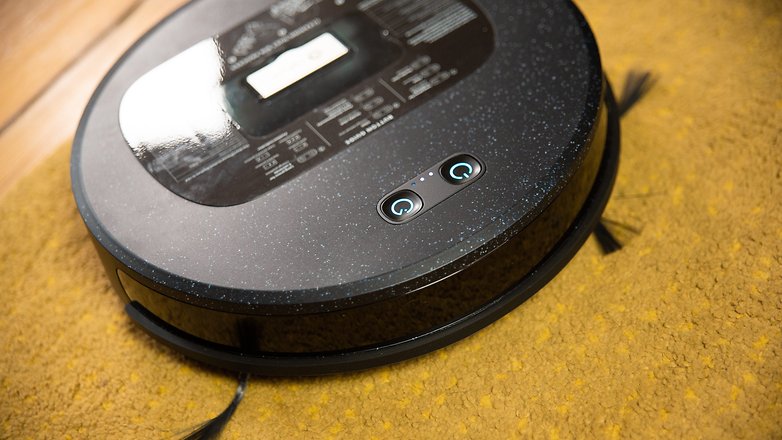 You will not find a laser scanner or other advanced navigation tools in the Lefant F1. However, you can hardly expect that for under $200. / © NextPit

There is also the option to have the robot mopped, albeit only with a damp cloth – and not properly dosed and on larger surfaces with the water tank. In addition, the robot sweeps everything from tiles to carpets due to a lack of underground recognition. But for under $200, anything else would be asking too much. However, there are better alternatives at the regular retail price of just under $300.

Below you will find the link to the Lefant F1 on Amazon. If you decide to buy the robot, make sure not to miss the $75 voucher.

was original published at “https://www.nextpit.com/lefant-f1-review”