Honor plans to attend Mobile World Congress where it will announce the global launch of a Magic phone – the Honor Magic V perhaps? The company’s first foldable is one of the more interesting devices recently unveiled.

Qualcomm’s Weibo account has agreed to reveal that the device will be powered by its flagship Snapdragon 8 Gen 1 chipset. That is the case for the foldable V, although it does not exclude the introduction of a new flagship. 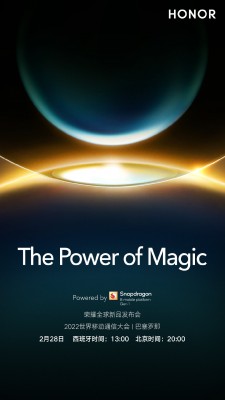 Honor has a line of non-foldable Magic phones, the latest additions – the Magic3 trio – were unveiled in August and include Snapdragon 888 and 888+ chipsets. A quick read of the rumor mill, however, finds no signs of a sequel to these phones, which brings us back to the Magic V.

And if that is indeed the star of Honor’s MWC show, it will have to compete with former parent Huawei’s P50 Pocket, which recently arrived in Europe for a price of €1,600. The starting price of Honor Magic V of CNY 10,000 suggests that the price in euros will be higher than that (the P50 Pocket starts at CNY 9,000 in China).

was original published at “https://www.gsmarena.com/honor_is_bringing_a_snapdragon_8_gen_1_flagship_to_the_mwc-news-52915.php”